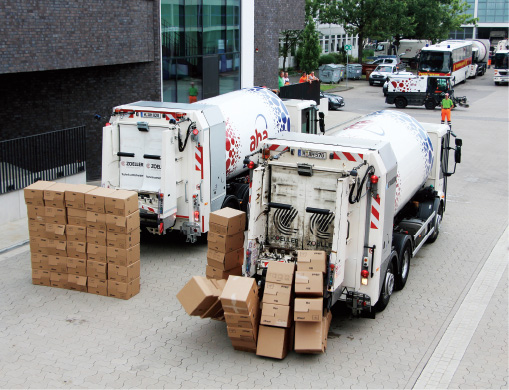 “A typical scenario for a garbage truck sees it traversing between cars parked on narrow suburban streets early in the morning when the sun is still rising,” says Daniel Nelson, National Sales Support Manager at Gough Transport Solutions. “Those are already several significant obstacles for the driver to deal with – and you haven’t even factored in lining up the vehicle with the wheelie bins yet, which usually causes a lot of stopping, starting and reversing manoeuvres.”

What Daniel describes paints a picture of a precarious worksite for waste collection vehicle drivers, especially considering that reversing a trailer is one of the most dangerous operating procedures, accounting for 35 per cent of incidents involving trailer damage and up to 40 per cent of fatal accidents*.

Although many a driver in the waste industry is specially trained for such a scenario, Daniel adds that even the most experienced and diligent of them would benefit from the increased safety of reversing systems like Wabco’s TailGuard.

“TailGuard detects small, large, static and moving objects in the blind spot behind the vehicle, forcing it to slow or stop,” Daniel says – adding that it is ideal for the varying environments of neighbourhood garbage collection.

Daniel explains that the system works through integration with Wabco’s latest braking technology to slow a combination that is moving any faster than nine km/h by pulsing the brakes, and bringing it to a complete stop automatically if it senses anything within a programmed distance of between 30cm and 200cm.

“TailGuard is automatically activated when the truck’s gearbox is shifted into reverse gear,” Daniel says. “Outline marker lights at the rear of the trailer start flashing, and warning signals sound – but they can also be silenced to be considerate during early morning garbage collections.”

Daniel says the alerts are there to warn people of the vehicle’s movements, informing them to keep a safe distance. But he adds that the system also helps keep the driver safe with a remote control function, meaning the driver can adjust the system’s features from inside the cab – and away from passing vehicles.

“The Trailer Remote Control is an innovative display-and-control unit for trailers that is mounted in the truck’s cab, displaying the distance between any detected objects and the trailer,” he explains.

Part of the remote is dedicated to showing the closing distance with a traffic light inspired colour scheme that also provides details on where the object is located in relation to the trailer.

“It can also be tied in with the trailer Electronic Braking Systems (EBS), suspension functions and view tyre pressure information all without leaving the vehicle,” Daniel explains – revealing that the TailGuard can be installed in four different configurations to suit more logistic environments than just garbage collection.

“There are many sectors of transport work that undertake a significant amount of reversing on a daily basis, all with different vision requirements such as height limits for warehouses or busy docks with lots of forklifts constantly on the move,” Daniel says. “There is a TailGuard option that will help reduce the amount of reversing accidents regardless of its settings.”

And of course, fewer accidents means that operators won’t find themselves out of pocket for repairs and vehicle downtime. “The system automatically forces trailers to come to a complete stop before they are anywhere near hitting anything. It’s similar to the Auto Emergency Braking (AEB) found in some of the more modern cars,” he adds.

No matter what environment, Daniel says that installing a TailGuard can help make a dangerous task safer. “Driving a heavy vehicle is a tough job, and the Wabco TailGuard can offer peace of mind when carrying out one of the highest risk moves that garbage collectors – and other transport operators – face every day.”