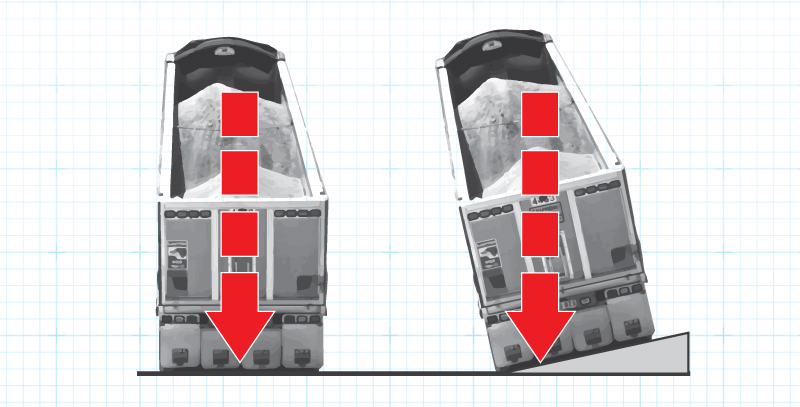 In a game of pinball, tilt warnings are sent to discourage an over-enthusiastic player from entering dangerous territory before a game-ending lock-up, but far more grievous outcomes are prevented by the tilt warnings in commercial road transport. Asan option through trailer electronic braking systems (TEBS) such as the Wabco TEBS-E series, the Tilt Alert feature can warn the driver if a lifting tipper reaches its physical limits of stability to assist in prevention of it rolling over.

“When unloading on an incline or rough surface, the risk for a vehicle or trailer’s centre of gravity to go past its limits of stability is increased,” says Nick Hope, Key Account Manager at Gough Transport Solutions (GTS). “Tilt Alert warns the driver with a light indicator and audible alarm, allowing the driver to lower the tipper in time to prevent a roll over.”

Although the prevalence of the once popular pinball machines dwindles, requests for the Tilt Alert feature of the Wabco systems are growing, Nick says, as the increased opportunity for action before an incident occurs helps operators reduce risk to people and plant around a tipping vehicle. “At GTS we offer the transport industry tailored TEBS kits to suit specific applications and needs,” Nick says.

“For the tipping industry in particular we have presented Smartboards, tyre pressure monitoring systems, finisher brake system and safe start. Now, the predominant feature being requested is Tilt Alert.”

Nick adds that the Tilt Alert function is fully customisable in order to match each tipper, with the warning threshold of inclination determinable by the vehicle manufacturer or with help from GTS. “Our team of experts can help install and program the Wabco system to our customers’ needs,” the braking expert adds.

Tilt Alert warns the driver with a light indicator and audible alarm, allowing the driver to lower the tipper in time to prevent a roll over.

With increasingly strict OH&S rules being implemented on the mining and construction sites frequented by tippers, Nick says the list of options provided by the Wabco TEBS platform allows GTS to offer a lot more safety features to fleets and owner-operators. “Tilt Alert is one of many intelligent support features that can help both experienced and new drivers stay in safe territory, so its no surprise that its popularity is on the rise.”