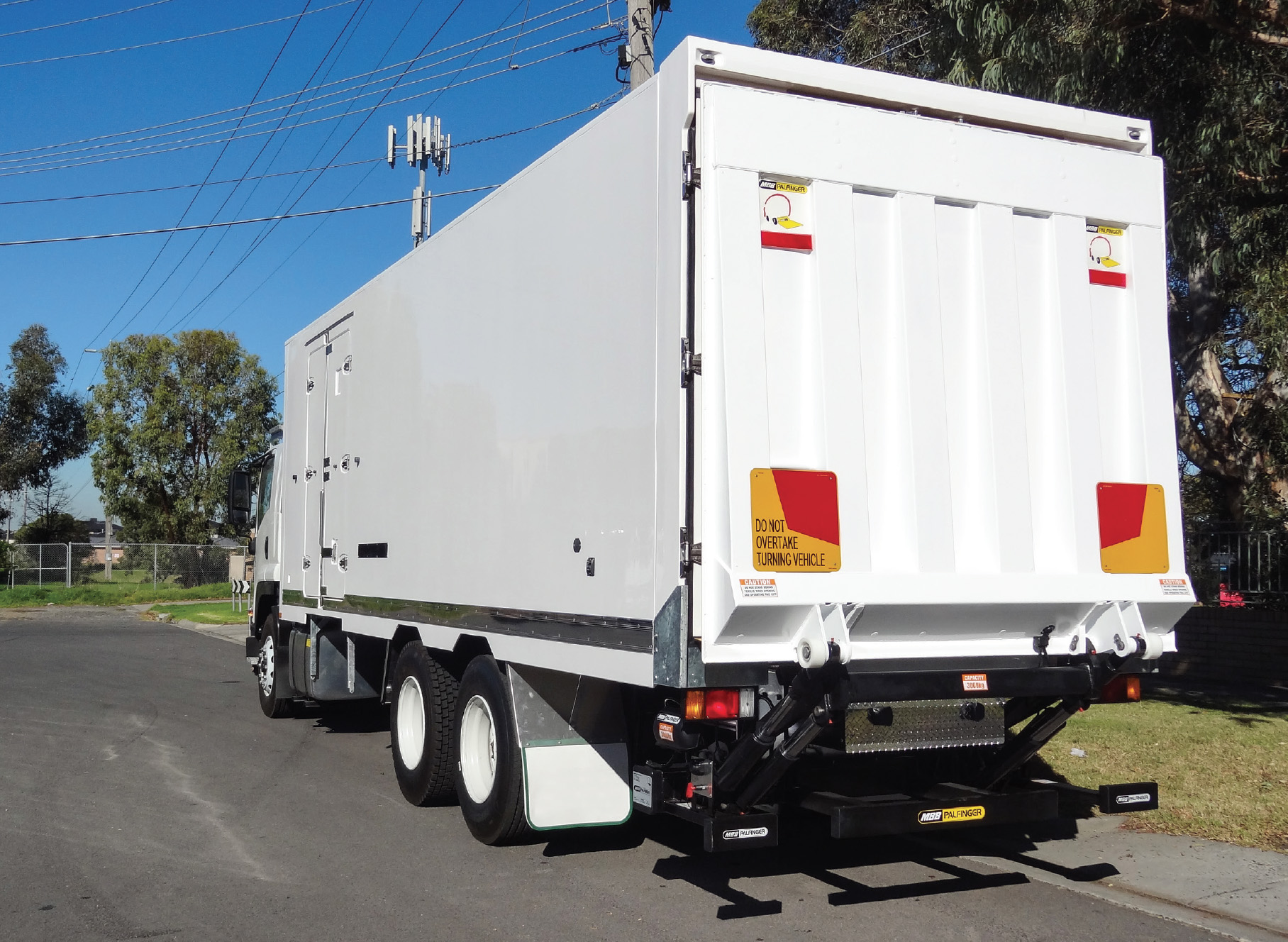 The unwavering reliability that PFD Food Services has experienced from its Palfinger MBB tail lifts has ensured its repeat business, especially when coupled with the high level of service from its supplier, Gough Transport Solutions.

Steve Wright, National Fleet Manager at food distribution company, PFD Food Services, is an industry veteran who holds a firm belief that the value of rigid truck components comes down to their reliability – especially when it comes to his tail lifts. “The reliability of every single piece of our equipment is paramount because every rigid that is not ready to go out on the road doesn’t contribute to the success of the business. The Palfinger MBB C3000S has been the most reliable tail lift I’ve ever had,” Steve says.

Steve started ordering MBB tail lifts from hydraulic equipment supplier, Gough Transport Solutions (GTS), around seven years ago when he first recognised the potential of the units. “I had a relationship with GTS for different products, and recognised that MBB tail lifts were a superior product to what we were using at the time,” Steve says. “Now, we only buy MBB tail lifts for use on any of the vehicles in the fleet.” At the moment, PFD counts around 97 rigids out of its 750-strong fleet that are currently fitted with the MBB tailgate loaders – a number that continues to increase as the company manages its growing business and updates its equipment.

Over the last few years, the PFD National Fleet Manager has been ordering his MBBs from Michael Orlando, National Sales Manager – Tail Lifts at GTS, who he says “really knows his product”. “I’ll continue to order MBB tail lifts from GTS because I’ve had very little or no breakdowns and I’ve never had a parts availability issue – not that I’ve needed many parts,” Steve says – adding that he really appreciates the full backup service that GTS provides.

The GTS dealer network has over 35 partners Australia-wide, offering design, supply, manufacture and installation services. Michael says that GTS has a dedicated warranty system with both workshop and on-road capabilities to maintain its selection of tail lifts and other hydraulic equipment. “Using the latest technology, GTS is able to react quickly and flexibly to best accommodate the service requirements of a fleet,” he says. “GTS has an underlying commitment to quality and innovation and understands that ‘total cost of ownership’ to owner drivers and fleets is paramount in minimising downtime, while getting the most out of its specified equipment.” Any repairs are simple, Steve mentions, as the steel MBB tail lifts generally don’t require any specialist equipment. However, Steve is quick to add that there has rarely been a need for repairs or servicing, as the MBB tail lifts basically never have any problems. “Once they’re fitted Steve doesn’t have any headaches,” Michael mentions, however there was one instance Steve recalls where Michael’s exceptional service was proven without a doubt.

“We had an unusual problem with one of the tail lifts that Michael had never seen before, so he jumped on a plane and flew out to our facility in Rockhampton to see what was going on,” Steve explains. Michael adds, “Historically, very little goes wrong with the MBB tail lifts. Steve’s issue intrigued us and we wanted to see what the cause was firsthand, and we rectified it straight away. A lot of suppliers wouldn’t go to that extent, but that’s the way we are at GTS. Palfinger tail lifts are not the cheapest on the market, but they have been that reliable that the money we would saved initially on a cheaper product has been paid off tenfold in our productivity gains. I haven’t had to replace an MBB tail lift yet,” says Steve.

Gough Transport Solutions (GTS) – a division of the Gough Group – is a major supplier of components and systems for the truck, trailer and tipper niches in Australia. GTS National Sales Manager, Michael Orlando, adds that part of the GTS promise is to offer ‘world class service’ to its customers by providing specialised advice at the point of specification and following that support up with consistent, reliable aftermarket care.