Putting the Brakes on for Safety 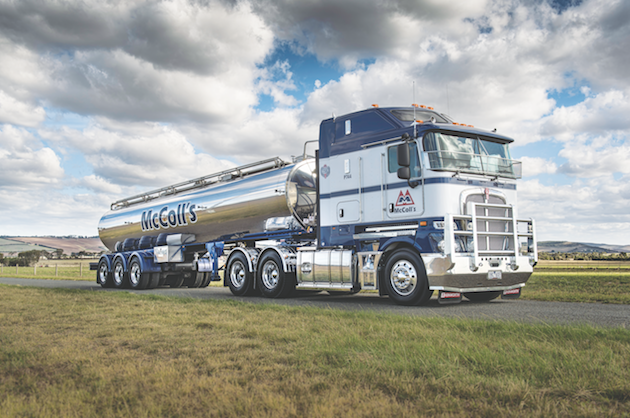 As part of its ongoing commitment to continually improve the safety of its fleet, bulk liquid carrier, McColl’s Transport, has enlisted the help of Gough Transport Solutions to retrofit the 600-strong tanker fleet with Wabco Electronic Braking Systems.

Established in 1952 with a single truck transporting milk around Geelong in Victoria, McColl’s Transport has grown into one of Australia’s largest carriers of dairy, bulk food and bulk chemicals, with a fleet of around 200 prime movers and 600 tankers operating all over Australia. It also has 14 depots, five workshops and employs around 450 people.

For McColl’s, safety is a top priority and this is reflected in the company’s five core values: ‘safety first, honesty and integrity, consistency, mutual respect, and commercial responsibility’.

It is this focus on safety that has led the business to partner with Gough Transport Solutions as it undertakes an Electronic Braking System (EBS) retrofitting program across its entire national fleet.

“Safety is number one at McColls,” says John Hovey, General Manager Fleet at McColl’s Transport. “Our trucks all have EBS with stability control and soon all of our tankers will too. At McColl’s we strive to make our tankers as safe as possible. For example, our handrails work in with our braking systems so that drivers can’t accidentally drive off with the hand rails up.
Also, on many of our new tankers, manholes are now being placed on the bottom so that operators don’t need to climb up on top of the tankers. Instead everything is operated from ground level. This is currently being implemented across all of the tankers used for farm pick-ups. We are leading the pack with that because now we have started retrofitting older equipment with manholes at the bottom too. We’ve decided to go down this path to help keep our drivers safe.”

Though McColl’s has been purchasing all of its tankers with EBS and including EBS on all tankers that have been refurbished for close to seven years, those purchased before this time hadn’t been fitted with this safety technology.

The EBS retrofitting program began with the McColl’s Bulk Chemicals Division, which carries chemical products such as solvents, emulsions, resins, alkalis, acids and agricultural chemicals. This was soon followed by tankers in the dairy and bulk food divisions. John reveals that the business is on track to have the entire bulk chemical fleet running on EBS within the next two years, and the entire dairy and bulk food fleet within the next three years.

To add, all tankers operating in New South Wales have now been fitted with EBS, in line with legislative changes that came into effect within the state in January 2019 mandating Electronic Stability Control.

“Most of the fitments are carried out in our major workshop in Altona, Victoria; however some are also fitted at our Tongala workshop in northern Victoria. Once they are fitted, Gough looks after the certification too. They have been really good to work with.”

Along with assisting with the EBS retrofitting program, Gough has also been working with McColl’s to begin fitting a customised tail guard safety system. The system works by automatically applying the brakes if anyone walks behind the vehicle or anything comes in the vehicle’s path while it is reversing. As the tankers often need to back in underneath another tanker, Gough worked closely with McColl’s to calculate the ideal positioning of the sensors to ensure they work effectively.

Fast Fact
Gough Transport Solutions (GTS) is a prominent supplier of quality truck and trailer equipment including hydraulics, braking systems, tail lifts, concrete pumps, plants, agitators and equipment. The company has a nationwide network of modern, well equipped workshops and field service divisions to capably manage the installation and servicing of the products it sells.