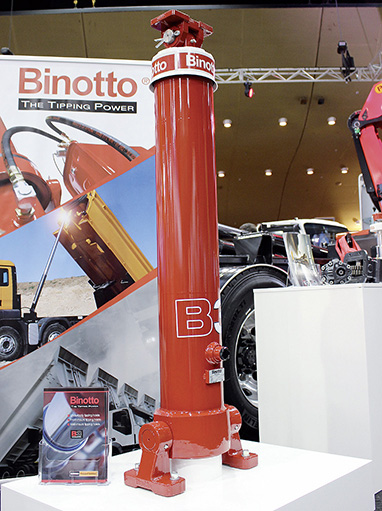 The new partnership between Gough Transport Solutions and Italian tipping hoist specialist, Binotto, has officially launched at the Brisbane Truck Show, with the seamless integration evidence of the synergy between the two firms.

Heavy-duty equipment specialist, Gough Transport Solutions (GTS), made headlines in the Australian transport hydraulics market in May when it announced an exclusive distribution partnership with Italian hoist expert, Binotto. Officially revealed at the Brisbane Truck Show, the news of the two leading companies coming together for a shared purpose has since rippled through the industry with overwhelmingly positive reactions. GTS Hydraulic Product Manager, Gary Butler, says that the positivity from industry speaks well of the synergy between the two businesses.

“Binotto has been a leader in the global hydraulics market for over 60 years, and the product sector has long been a major focus for GTS,” he says. “There are a lot of shared values between the two businesses, so the announcement of the exclusive distribution partnership was well received.” According to Binotto CEO, Giuseppe Martinon, the change in distribution came after the Italian company conducted a strategic review of its arrangements in Australia, and concluded that the brand and product range would be better served under GTS.

A major influence for choosing GTS for the new partnership is its national service network, Giuseppe says, which the company has been heavily investing in over recent years to ensure it covers the whole country.

Now, customers around Australia have access to the entire range of Binotto tipping hoists through the GTS network, including well-mount, front-mount and underbody options for various applications, ranging from a one-tonne ute to a 50-tonne, Performance-Based Standards (PBS) approved bulk tipper combinations, Gary says.

The Binotto product range is already well-established in the Australian market, having been a premium option synonymous with high quality for over 20 years.

The Italian brand is known for its leading technology, which it is constantly investigating and developing to find improvements. Gary says Binotto made a major upgrade to its range of tipping hoists in 2014, when it launched its telescopic B3 technology cushioning system. “As the tipping hoist extends, the B3 technology provides a cushion effect at the end of the stroke of each stage. This reduces the impact and the wear on the surfaces as the connect between stages, which equates to a longer life and a smoother operation,” Gary explains – adding that the B3 technology also means the hoist can be worked at a higher speed without causing internal damage, which is an efficiency gain highly appreciated by tipper operators.

“Cushioning systems in general aren’t new technology, but Binotto was the first company in the world to integrate it into tipping hoists,” Gary reveals. “Team members from Binotto’s head office came out to train GTS staff on all of the features and specifications of the hoists, helping to start the partnership on the right foot.” Binotto also sent a representative to Australia for the official launch of the partnership at the Brisbane Truck Show, which Gary says is indicative of the company’s dedication to the Australian market.

“Binotto is the classic customer-focused Italian company that is quick to respond to requests, and committed to working together with GTS,” Gary says. “Although Australia can be considered a fairly small market in terms of volume compared to Binotto’s European output, for example, it is certainly interested in this market, and growing market share here.” Though Gary says it’s still early days in the partnership, the response from customers and industry alike has meant GTS is picking up business it didn’t expect, thanks to the Binotto and GTS reputations combining. “We knew Binotto makes a good product, but the uptake has been to a greater extent than we imagined,” Gary admits. “Binotto has a strong following of customers across the country and with our new exclusive distribution partnership, that will only get stronger.”