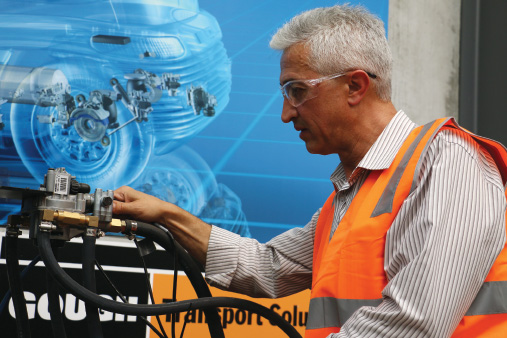 In his 30 years of working with trailer brakes, Gough Transport Solutions’ Steve Cuzzupe has seen the components change dramatically as technology advances. Trailer asked the expert what’s coming next.

Q: What initially attracted you to working with brakes?

A: I’ve always liked the technical stuff with all the bells and whistles. When I started working with brakes in 1986, they were very crude. There were no spring brake boosters. Trailers were parked using compressed air. I knew then, as I entered the industry, that there would be new developments and innovations in the technology, and surely enough, it happened.

Q: What developments have you seen?

A: In the early 90s, B-doubles were introduced into Victoria and the Government said that the industry could only have the right to use them if they improved the safety features. The industry came back and proposed Anti Lock Braking Systems (ABS).

After around 12 months, the ruling was temporarily overturned to take ABS off trailers, but at the end of the 1990s, safety issues finally brought them back.

Then, ABS was soon followed by Electronic Braking Systems (EBS). From what I could see, EBS was a case of using the idea behind ABS, which had basic electronics to control the braking independent of the driver to avoid locking up. Engineers built on that idea, and added more electronic systems with safety and productivity features.

Q: What kind of other features?

A: The systems of today can tell you load weights, vehicle speeds, tyre pressures and even control the suspension system. Most late model EBS can detect upcoming scenarios when a vehicle is in motion and apply the brakes accordingly, which is used for things like roll stability.

At the end of the day, the introduction of electronics has had the same sort of impact on brakes as it has on trucks, TVs or computers. And, as with any technology, it keeps advancing.

A: The next step, which is years away but definitely coming, is to remove the air from being the medium and eventually it will be fully electric with solenoids applying the brakes. More rules need to be overcome to get to removing air, but the industry is working together with organisations like ARTSA (Australian Road Transport Suppliers’ Association, ed.), that allow a platform for people with years of industry experience to come together. These meetings are crucial to making change.

Q: If removing air is on the horizon, what do you think is around the corner?

A: Australia is just behind Europe, where electronic solutions were developed. That’s what’s growing now, introducing more telematics, reverse sensors, cabin control, suspension control. It’s all mostly available in Australia now, but the market acceptance is growing as people see the safety benefits of taking the load off the driver so they can concentrate on driving.

A: GTS does more than brakes, we have multiple product segments within the company. GTS gives all of its departments equal footing. For example, with the introduction of ADR 38/04 at the start of 2015, I had the freedom, backup and latitude to do what was required to accommodate the new law. I put on a new engineering manager and more representatives to help our customers.

GTS understands that if you seriously want to be a market leader, you need that sort of backup. You can’t do it on your own. And it’s proven that it is serious about being in the industry and being around for decades to come.