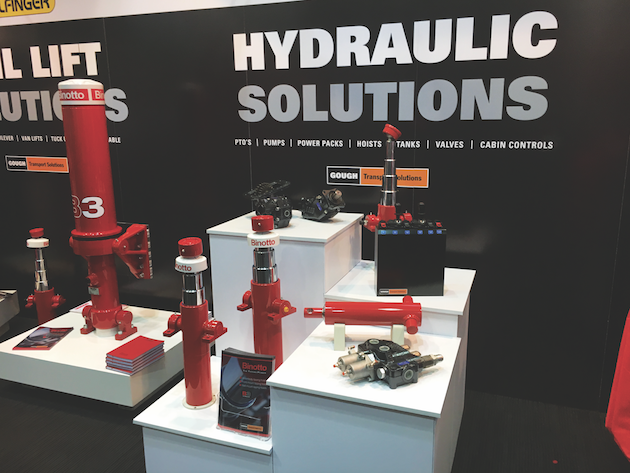 Gough Transport Solutions supplies hydraulic equipment from Italy’s OMFB and Binotto to ensure trailer builders and fleet operators have access to premium quality gear that is optimised for tipper applications.

For an innovative company like OMFB, with a history dating back to the 1950s in Italy, its high-quality hydraulic system components are in increasing demand around the world.

The Italian brand was founded by brothers Umberto, Nicola and Alessandro Bianchi who coined the trademark OMFB, which stands for Officina Meccanica Fratelli Bianchi (in English, Bianchi Brothers’ Mechanical Workshop).

As the years progressed, so too did OMFB and its suite of hydraulics products. As an Australian distributor, Gough Transport Solutions (GTS) provides the commercial road transport industry with the latest OMFB Power Take-Off (PTO) units and associated pump, valve and control products.

GTS Hydraulics Product Manager, Gary Butler, deals with a variety of clients, some who know exactly what they want and others who only know what the intended application is. He says that anyone can take an order and ship a box but it takes a strong business like GTS to consult with a customer and deliver a solution that works.

“GTS has been distributing OMFB PTOs and hydraulic equipment for over 20 years because, as a premium Italian brand, its overall range and flexibility is second to none,” Gary says. “We ask our customers the right questions to find the ideal product from OMFB’s comprehensive range.”

One of the latest PTO product options that has become part of the GTS standard catalogue is a heavy-duty range of twin-gear, rear-of-countershaft PTOs. The powerful units are available for a range of Mercedes, Volvo and ZF transmissions and offer increased maximum torque ratings compared with other versions.

“Ever-increasing hydraulic system demands call for stronger PTOs to drive bigger pumps,” Gary says.  “OMFB has again been equal to the task and responded with a new bullet-proof series of PTO. OMFB is a company that is always developing new products in response to demand. Sometimes that’s because we asked them to develop something for us. OMFB has come up with products specifically for us in the Australian market that it doesn’t sell anywhere else.”

Gary explains that Binotto is a global leader in the design, manufacture and distribution of a comprehensive range of tipping hoists.

“Established for over 60 years, Binotto products are produced throughout five state-of-the-art manufacturing plants worldwide and have been available in Australia for over 20 years,” he says. “Since 2017, the entire range of Italian Binotto telescopic tipping hoists have been distributed exclusively by GTS.”

Binotto’s B3 technology of stability, safety and durability is said to offer 20 per cent faster tipping cycles compared with non-B3 hoists of the same diameter. They are also reported to be quieter in operation and provide greater vehicle efficiency, particularly at end-of-stroke, and at high speed.

GTS stocks a selection of Binotto telescopic tipping hoists designed for three-way tipper options as well as rear-tipping and side-tipping applications. All Binotto equipment is tested for use in extreme environments from the Siberian steppes to the Saudi deserts, according to Gary.

“Australia’s more regional locations can be very demanding on road transport equipment, which is why GTS stocks premium hoists that are suited for heavy-duty freight tasks in the Australian sun,” Gary says.

GTS often supplies holistic tipper solutions to its customers in a kit with OMFB PTO, pump and a hoist made by fellow premium Italian company Binotto.

“Premium products are a better investment,” Gary says. “It may not be as cheap up front, but if you pay a little more and get twice as much out of it, then it’s better value.”