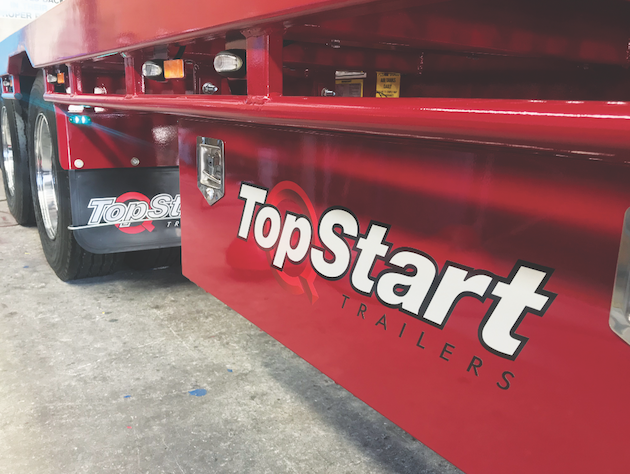 In the lead-up to this year’s Australian Design Rule ADR 38/05 mandate of electronic braking systems on heavy trailers, Gough Transport Solutions has adapted a function within the WABCO EBS system that visually signifies the EBS status of each trailer.

About the same size and shape as an LED trailer clearance light, it is mounted on the side of each trailer in the combination and emits a continuous soft green hue to indicate the EBS is functioning.

According to GTS Key Account Manager for Braking, Glenn Stone, there was previously no tell-tale indication that the EBS was functioning.

“There is an EBS warning light on the dash of the truck that illuminates when a fault is detected but nothing that indicates the system is working as intended on each trailer,” said Glenn.

Typical examples of EBS not being operational are when an EBS cable is not connected during trailer coupling or becomes dislodged during the trip. When this happens the braking system defaults to the standard air operation which renders the vital safety features like anti-lock braking (ABS) and roll stability control (RSC) inoperative. This can also lead to severe brake imbalance with trailer wheel lockup causing undue wear on tyres and brake components.

Other recently adapted safety features that rely on operational EBS include WABCO Tail Guard where during a reversing procedure the brakes are autonomously applied when a sensor detects an object close behind the trailer.

With the GTS ‘green light’ system, the driver can clearly see each green light of the combination in the rear-view mirror and therefore has peace of mind that EBS is functioning on all trailers. Similarly, it provides visual confirmation for the likes of operations managers as the vehicle leaves the depot.

Another benefit when the new ADR 38/05 becomes law later this year is that law enforcement officers will be able to ascertain EBS operation during regulation drive-through weighing procedures, for example.

Glenn goes on to describe how the  tell-tale light system by GTS works.

“Working with the new generation WABCO EBS, it’s wired in with the computer, ignition and power circuits of the prime mover so if any one of these circuits is broken the green light will go out, indicating EBS is not working,” he said.

“It works in a similar way to the green light on the front of fridge vans that continuously glows to signal normal operation of the refrigeration plant.

“We see it as an important safety feature that assures the truck operator that the EBS is working on the whole combination, be it semi-trailer, B-double or road train.

“There are a number of fleets now fitting this product to their trailers and quite a few trailer manufacturers already regard it as must-have equipment on their new trailer builds.”

Apart from the obvious safety benefits for the driver and other road users, functioning EBS is also a necessary part of the system that enables recording of operational incidents such as heavy

As the conversation continues, Glenn describes the circumstances that led to the decision to use green as the colour of the EBS light.

“We were talking with the authorities about whether we could use a magenta or red light but because these colours are used by police and Roads and Maritime Services vehicles.

“For example, we were informed that green was the only colour allowed.

“Fleets are now looking for other safety benefits of EBS such as WABCO’s Tail Guard, which automatically brakes the trailer if it comes too close to an object when reversing.

They want to know that the system is working to enable features like Tail Guard that can prevent damage and potentially saves lives,” he said.

While there’s been a steady rise in EBS fitment to heavy trailers over the past decade or so, with the Australian Government set to mandate Electronic Stability Control (ESC) for heavy vehicles and Roll Stability Control (RSC) for heavy trailers – embodied by the respective Australian Design Rules ADR 35/06 and 38/05 – the potentially life-saving technology will be far more prevalent on trailers in the years ahead.