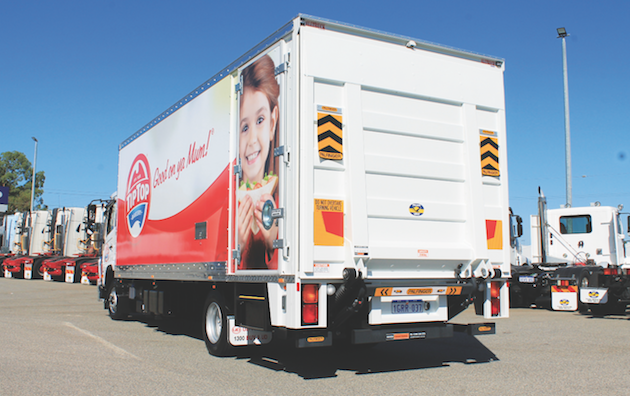 The Tip Top bakery in Perth has been using Palfinger tail lifts supplied by Gough Transport Solutions for the last five years. Enduring capability and durability in harsh conditions keep Tip Top coming back for more.

The Tip Top bakery in Perth has been using Palfinger tail lifts supplied by Gough Transport Solutions for the last five years. Enduring capability and durability in harsh conditions keep Tip Top coming back for more.

The old saying ‘you get what you pay for’ couldn’t be truer when it comes to road transport equipment.
Like everything, there are cheaper alternatives when it comes to tail lifts; but in the long run the products with a lower initial cost can actually end up costing far more after losses caused by downtime and repairs are factored in.

The fact is, tail lifts are a critical component of many delivery operations such as that of the Tip Top bakery in Western Australia. To keep up with demanding delivery schedules, this highly specialised piece of equipment is expected to work flawlessly at every delivery point day in, day out.

Not only that, while travelling between delivery stops it must endure the consequences of road conditions that can vary widely, particularly in WA. Clearly, this is no place for an inferior quality product.

Palfinger tail lifts have a number of features designed to ensure longevity and durability. For example, the power pack is located within the main support beam of the lift mechanism, eliminating the potential for external road damage.

Palfinger tail lifts are designed and manufactured in Germany for Australian conditions. They have minimal maintenance requirements and their longevity is assured, given every model is tested for 60,000 load cycles before being offered to market.

These are facts not lost on Phil Boone, Fleet Manager of Tip Top WA. The company started purchasing Palfinger tail lifts about five years ago after recognising the false economy of cheaper alternatives. Today, there are around 40 Palfinger tail lifts in the fleet, with a batch of 14 new units having recently arrived.

“We had been using a cheaper brand and found that the reliability wasn’t too good so we decided to investigate the alternatives,” Phil says. “GTS came up with a competitive price on the Palfinger units so we decided to run with them, which has worked out really well for us.”

The company runs about 100 vehicles including semi-trailers and rigid trucks which collectively cover just under five million kilometres per year. This can be quite a handful for Phil to manage and he says the lengthy distances some of the vehicles travel on a daily basis is another reason why reliability of the gear is of crucial importance.

“We have trucks operating out of Esperance which is 800 kilometres from Perth and they don’t have the facilities or technicians to work on the tail lifts there. So, we need to have exceptional reliability in the trucks and the tail lifts. The only time we want to see them is when it’s time for their scheduled servicing.”

Speaking of the trucks, Phil says the company has been using UD rigids including MK, PK and PD units – the latter two being of 6×2 configuration – for some time now. These are proving highly reliable also.
“We’ve been buying UDs for a fair while now and have found them to be a good quality truck,” Phil remarks. “The after sales service is top notch and spare parts are kept in WA, not shipped from the eastern states which is costly and time consuming.”

The trucks are supplied by The Truck Centre WA in Perth with the bodies manufactured and installed by Alltruck Bodies in Victoria. Following this the tail lifts are fitted by GTS, after which the trucks are delivered to Perth in ready-to-go form.

According to GTS National Sales Manager, Michael Orlando, the company works closely with its customers like Phil Boone at Tip Top WA to ensure the tail lifts precisely meet the requirements of their applications.

“We can’t stress enough the importance of having the right load centre rating on the platform,” Michael explains. “Having the wrong load centre can be dangerous for the operator and also puts undue strain on the lifting arms and hydraulics.”

In respect to providing the optimum tail lift specifications for Tip Top WA and ensuring all facets of the build go smoothly, Michael acknowledges the continuing co-operation and support between GTS Sales Manager in WA, James Wesley, Phil Boone at Tip Top WA, Trent Harris from The Truck Centre WA and Mike Lawson from AllTruck Bodies. “On behalf of GTS I’d like to thank each of these people for doing their utmost to ensure each build program is seamless through continued dialogue and support.”