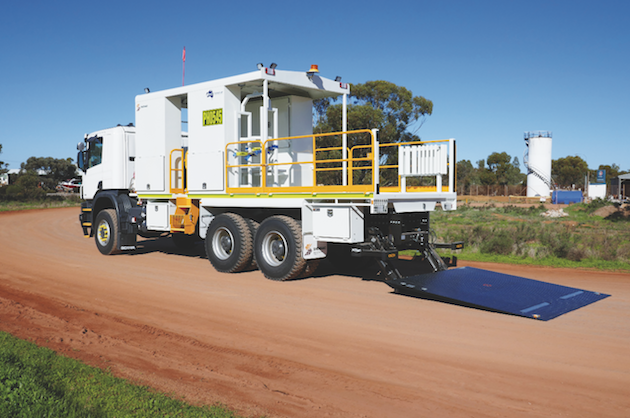 When Shermac was approached to produce four rigid bodies for a major iron ore company operating out of the Pilbara, strength and durability were part of the criteria. The unique design required the use of tail lifts and Palfinger’s robust MBB C 2000 S from Gough Transport Solutions was a perfect match.

For Shermac Engineered Equipment Transitions, unique and customised transport solutions for the mining sector are its specialty. The family owned and operated business was started by Mike Ray and his brothers Jim, Robert, Bill and Steve in 2006, based in Western Australia’s Wheatbelt region. Coming from a farming background, the brothers set out to produce machinery for the rotational moulding industry. But as Mike explains, they fell into the mining business almost by accident. “We developed a fuel trailer that was aimed at small truck and bobcat operators. In trying to market and sell that we found a shortage in the mining sector so decided to go down that path. Now we specialise in custom built truck bodies and trailers for the mining sector,” he explains.

“At Shermac, we work very closely with our customers. Often, there is quite a lot of toing and froing with drawings to ensure we get everything right and the equipment perfectly suits the customer’s needs. There is a lot of collaboration between Shermac’s engineers and the customer, especially towards the latter end of the buying process.”

Recently the company produced four rigid bodies, built onto Scania trucks, for Fortescue Metals Group (FMG), which is one of the largest iron ore producers in the world. It owns and operates three mine sites in the Pilbara, along with a heavy haulage railway and a port in Port Hedland. The railway is used to transport iron ore from the mines to the port.

Delivered in August, the new trucks were purchased to service and maintain the company’s railway lines. “They were designed for a highly specialised purpose. They are a tray back with toolboxes, a cover over the top to protect what’s inside, and racks for mounting tools and machines on the back of the truck. FMG has quite a lot of heavy tools that need to be carried on these vehicles so they requested tail lifts to make it easier to get them on and off,” says Mike.

Shermac has been a long time customer of Gough Transport Solutions, particularly through the purchase of hydraulic equipment such as PTOs and pumps. The business has also fitted numerous Palfinger tail lifts and cranes to its trailers and truck bodies. So when tasked with finding the right tail lift for the task at hand, Mike says he was happy to go with the Palfinger brand, as recommended by Gough, as it is a name he knows and trusts.

Capable of lifting up to 2000kg, the Palfinger MBB C 2000 S tail lift relies on a heavy-duty four-cylinder lift mechanism, which can be used together with a wide range of different steel or aluminium platforms, depending on the needs of the operator.

Key features of the MBB C 2000 S include fixed control and pendant control, platform auto-levelling, roll stops, flashing lights and foot controls. Since being put on the road, the new trucks – and their tail lifts – have been living up to the everyday challenges they are faced with.

“The tail lifts haven’t been in service very long, but so far they are working well,” says Mike. “We have been using Palfinger for a long time and have been dealing with Gough Transport Solutions for a long time. There are a couple of things we look for in a supplier. As well as good service, we need a supplier that is knowledgeable and competent, particularly when they are supplying reasonably technical products. The other thing we need is prompt and timely service. When we need parts, we really need responsiveness. And Gough really delivers on all of that.”